Thanks to all of these media outlets who helped us spread the word! 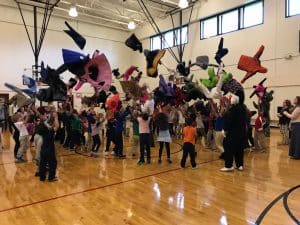 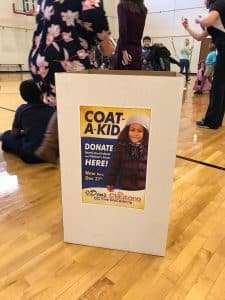 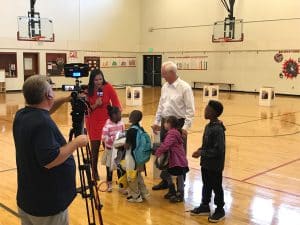 EVANSVILLE, Ind. – Steve Schmitt, owner of Don’s Claytons DCI Fine DryCleaning, is committed to annually providing a winter coat for every child who needs one. Since its implementation at the local level, the Coat-A-Kid initiative has distributed over 150,000 coats throughout the community. Each year, from October through December, community members are invited to bring gently used and new coats to any Don’s Claytons location. The coats are cleaned, if needed, and distributed to area infants, children, and teens via the Salvation Army, Evansville Christian Life Center, and in Boonville, at Hope Central. END_OF_DOCUMENT_TOKEN_TO_BE_REPLACED

What an enthusiastic group we had helping us kickoff our annual Coat-A-Kid program. Lodge Community School was the venue and the wonderful students served as our joyful cheering section. Also on hand to launch our 30th year of the program were representatives from organizations that distribute the coats.

And who joined us there in spirit? You, our valued customers, who so generously support our efforts year-after-year by donating children’s coats. If you’re a customer who’s new to the area, we invite you to come aboard as we band together to keep our area kids warm this winter. END_OF_DOCUMENT_TOKEN_TO_BE_REPLACED

Don’s Claytons had a great Coat-A-Kid Kickoff with the students at Cedar Hall Elementary School!

Every year I enjoy taking coats to one of Evansville’s Title 1 schools and helping the kids try them on and pick one for the winter. It’s a lot of fun – and again this year The IceMen’s Coldstone Blizzard came along!

Kickoff week is ALSO the time we remind the community that EVERY WINTER at Coat-A-Kid we run out of coats BEFORE we run out of kids who need them! END_OF_DOCUMENT_TOKEN_TO_BE_REPLACED

EVANSVILLE, Ind. – Maybe it’s because people think times are better now. But whatever the reason, a lot fewer coats are coming in for the Coat-A-Kid program and Steve Schmitt wants us to know the need is still there.

“This year especially we want to remind the community – and parents going through their children’s winter things – to please bring in gently used coats,” Schmitt says. “Especially infant and children sizes. We always run out of those before running out of kids who need them.” END_OF_DOCUMENT_TOKEN_TO_BE_REPLACED

Coats Now Being Accepted at All Don’ Claytons

Blizzard, the Polar Bear brought a lot of excitement to this year’s Coat-A-Kid kick-off at Highland Elementary on Oct. 10. The Evansville IceMen mascot handed out coats and gave hugs before students enjoyed the traditional throwing of their coats into the air.

For the sixteenth year, Don’s Claytons owner Steve Schmitt headed up the kick off of the coat drive, which this year will far exceed 135,000 coats that have been cleaned and distributed to area kids since 1986.
END_OF_DOCUMENT_TOKEN_TO_BE_REPLACED

“The need in this area was greater than we’ve seen before, but there were enough coats this year to fill every request,” Don’s Claytons owner Steve Schmitt says. “Last year we ran out of coats before we ran out of kids who needed them. So we were happy to have enough this year – and want to thank everybody who donated.” END_OF_DOCUMENT_TOKEN_TO_BE_REPLACED

Coat-A-Kid 2011 Kicks Off at Dexter Elementary

The annual Don’s Claytons Coat-A-Kid Campaign kicked off November 15th at Dexter Elementary School, where the Evansville IceMen took part in the event.

Since the Coat-A-Kid program began in 1986, Don’s Claytons has cleaned more than 130,000 coats, all given by the community and distributed to children and teens in need by the Salvation Army and Evansville Christian Life Center. END_OF_DOCUMENT_TOKEN_TO_BE_REPLACED

Coat-A-Kid 2010 Kicks Off at Lincoln Elementary

There was a big turnout at Evansville’s Lincoln Elementary School on November 9th for the kick-off of the 2010 Coat-A-Kid campaign, sponsored annually by Don’s Claytons Fine Drycleaning.

Evansville professionals know the importance of finding the right dry cleaner, but Don’s Claytons is so much more than just a place to drop off your suits. Last fall, I brought in my entire winter wardrobe of sweaters and coats to be freshened up, and I couldn’t have been happier with the results!
— Jason S.

I absolutely love Don’s Claytons Time Saver Laundry drop-off service. Working full-time with my kids…I would never have a minute to enjoy to myself! Not only does it give back precious hours to my day, but it helps make sure I don’t miss those precious moments with my family!
— Kelly D.